My wife an I have undertaken to watch through the entirety of the existing Marvel cinematic universe in chronological order in preparation for the inevitable release of Avengers: Endgame - the supposed endcap for the first three "phases" of their foray into film. 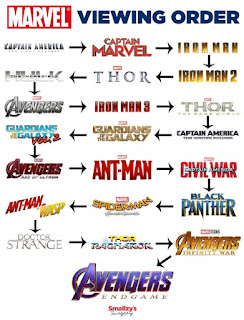 This time around I've identified my favorites from their stable of films as the following:

You may notice some recency bias. I am not sure why, perhaps I haven't had enough time to tire of the newer themes, or perhaps the newer movies are just better.

Captain America: The First Avenger
I think this is a very classy movie. I like the atmosphere and composition. The character development is thoughtful and meaningful. The pacing is a bit slow for what this film is, though, which is the primary reason why I don't often come back for repeat viewings.

Captain Marvel
Honestly better than I thought it would be. This film was ill-served by its repugnant and oddly feminist social marketing campaign, but the distaste of that will die out in time. Overall, the theme of this movie is less GRRRRL power than it is about understanding what you have to offer and where that can go wrong. The internal cannon of the infinity stones and powers derived from them is a bit muddled, but I have high hopes the confusion will be clarified elsewhere.

Iron Man
This movie is well-grounded while a wonderful celebration of the ability to find meaning and purpose through a higher morality. None of this is pointed toward true purpose, but it is a favorite journey nonetheless. Perhaps a bit slow in its pacing, my nostalgia glosses over any of these shortcomings. I love this movie.

Iron Man 2
I really enjoy this movie in so many ways. There is a lot of substance here in the steady deconstruction of its central character. Ultimately, though, this movie falls short on viewer engagement. It is a bit like Andy Griffith Show episodes for me. Which is to say that while I would never intentionally turn it on, I have never disliked watching it.

Thor
Enjoyable for its fan service only, this movie is dated and becomes bland. It does not hold up to close review. The portrayal of Loki is the most interesting part of the movie, but not enough to bring me back.

The Incredible Hulk
The basic story is well done. However, this movie tries to be and accomplish too many other bizarre things to truly succeed. Also, the core relationships in the movie are written and acted with confusing distraction while providing very little substance or resolution. It is enjoyable, but not really worth revisiting unless called upon by a marathon like the one we just ran.

Avengers
This movie tries to be so much more than what it is, which comes across as predictably cartoonish at moments. Despite this, it is a well-written and well acted story which brings together a stable of prior storied characters in a spirited and satisfying journey. I've watched it many times and am likely to watch it many more.

Iron Man 3
Clever and possessed of more substance than I've credited it for in the past, this movie is very good. This movie begins the vein of self-criticism that grows steadily through Marvel's movies until it finds arbitrary culmination in Captain America: Civil War. While a decent theme overall, the writing behind "You saved our lives but at a cost, so we resent you" hasn't been satisfying in the least. In fact, it often feels downright contrived. This theme casts a shadow over this movie that doesn't entirely steal its excellence, but does sour my enjoyment.

Thor: The Dark World
This movie vacillates rapidly between awesome and overdone. There are some genuinely emotional moments amidst the self-important interludes. It's not enough to make me love the movie, but I think this film is far better than most acknowledge. To me, the villains are a bit tedious and difficult to enjoy, but otherwise this film moves the overall story forward in many gratifying ways.

Captain America: The Winter Soldier
A return to the earthy roots of Iron Man coupled with honest to goodness spy intrigue makes this movie an outstanding favorite. Following beloved characters as they experience the horror of watching the monolith they fought to create crumble into the very evil they had hoped to vanquish is a hard story to write but one that's written very well in this screenplay.

Guardians Of The Galaxy
An exuberant romp through the stars. I watch this movie again and again. Plot and character development is top-notch. Editing doubly so. I couldn't hope to encapsulate this movie in a few lines, but it stands apart from its counterparts as a truly magnificent self-sufficient storyline.

Guardians Of The Galaxy Vol. 2
Again a very enjoyable movie. The development of some of the relationships in the movie is masterful. There are setpieces which stand out. However, there's just too much in here that's laborious. It's not a favorite film because it is really good but not quite good enough.

Avengers: Age Of Ultron
Good enough. The movie has two major flaws in my opinion: 1) the plot development is a bit forced, and 2) the fan service is a bit too blatant at many points. Overall, I am comfortable calling this movie both essential and enjoyable. It's just not a favorite.

Ant-Man
Paul Rudd takes this movie to another level. There are a few things that make this movie worth watching over and over. The titular character's journey to devoted fatherhood is magnificent. As is the echoing journey toward the same goal in his predecessor. The writing behind a complex family structure is filled with hope and appropriate focus. This movie is an absolute gem.

Captain America: Civil War
There is a lot going on in this movie that is great. I'd almost call it a great movie. However, the central conflict is so petty and self-absorbed that it frequently feels horribly contrived. I'm not speaking of Zemo's desire to rid the world of super-powered individuals. That theme is well handled and believable. The fundamental disagreement between freedom and regulation is poorly set up, poorly explained, lacking essential nuance and petty to the point of ridiculousness. It detracts from the film's impact and drags it down from the height of good (or even important) story telling to the banality of comic trope.

Black Panther
This is a great story. It's not for me. The central machismo driving the conflict and understanding between the villain and hero is entirely disdainful for me. "Might makes right" is certainly a legitimate theme and worthy of exploration, however, I find that might versus might is a deeply dissatisfying approach to resolving this theme. Had the film focused more on "right makes might" for the hero, I would have resonated with it more. Overall, the film addresses social issues and progresses the story well. I think it will ultimately stand above the rest of the Marvel universe in many ways. Even so, I think there are better stories being told around it.

Spider-Man: Homecoming
This movie is fun and accessible. Somehow it nods to all the complex issues being obsessed over in its sister stories without allowing them to steal the joy from this coming of age tale. Spider-Man is awesome and he wants to do what is right. This comes across so articulately and so powerfully that it overwhelms any other, more tedious themes which try to take over. What a fun ride.

Ant-Man And The Wasp
The continued excellence of the main character and exposition on the healthy growth of his complicated family make this a favorite. I find the ghost villain almost too dreary to bear. Fortunately, the rest of the film transcends the central conflict by keeping its focus firmly planted elsewhere.

Doctor Strange
A man who thinks much of himself is humbled and changed. There are a lot of other themes here. Particularly charting a course out of hopelessness alongside addressing the addictive obsession of someone who is close. This film turns every issue into a confusing morass of moral gray, then applies an unwavering moral compass to the situations, making for a cohesive and meaningful story that is worth revisiting over and over.

Thor: Ragnarok
This is the first Thor movie I could watch on a whim. Sometimes it gets lost in its own levity, but overall it brings strong characters to a strong story, develops them satisfyingly and resolves a plot with high entertainment. I have yet to tire of it in the slightest
Posted by TokranePo at 2:19 PM